The Primer of “The Seasons”
Eimuntas Nekrošius Interprets Donelaitis
[…]
The space in this performance does not have a concrete time and geography. It is a kind of workshop, in which everything can be created and enacted on the spot. The workshop atmosphere is conveyed by the set design – freshly polished wooden benches, a table, a door and bricks are as if brought from the rehearsal room of “Meno Fortas”. In the course of the performance all these objects will act as a kind of workshop tools for creating stage images. The only fixed object of the set design is a square of dry soil hanging above the actors’ heads, which as if connects a clump of earth and the vault of heaven (stage designer Marius Nekrošius). […]
Nekrošius constructs his “Seasons” from very simple sketches put together in a similar manner as bricks are placed at the edge of the proscenium. They help to create miniature plots from the flow of images of Donelaitis’ poem. Spring sketches, fragile and brittle like a splinter of glass or ice glittering in the sun, or the gurgling of a spring. And autumn sketches, heavy as an old person’s breathing or moaning. Sometimes an image is constructed solely from a textual hint generalising the whole scene. The demonstration of the process of creating the sketches is not aimed at itself – it helps the actors to find a convincing motivation of an image and say Donelaitis’ hexametrical text like their own words. It consumes a particularly great amount of energy and stage time. Creating images becomes hard work for the actors and a kind of adventure for the audience. […]
The images of the performance are built as if from childhood reminiscences, they are shaken out like one shakes out a shirt stuck to one’s sweating body in spring, and breathing becomes easier. Probably for the first time Nekrošius allows himself to breathe freely and experience pleasure, as the most beautiful moments of life do not last long, like the joys of spring, and the approaching autumn makes one’s breathing heavier and makes one’s heart ache… […]
In this field electrified by transformations of nature and man, the principal story of the performance is born. It is the drama of the Creator’s fate, impersonated by the character of the young protagonist-narrator (actor Salvijus Trepulis) and based on the facts of Donelaitis’ biography. Not only Lithuanian writings, but also priesthood, assembling a parochial orchestra, constructing a church, interest in telescopes and even glass polishing – all that becomes an authentic material for this image. Thus Trepulis’ character is not clearly named – he is a teacher, a priest and a creator. He organises and shepherds people, heals them and instructs his small community like scattered sheep. He takes care of everyone like his own child and treats everyone like his own creation. He does it because of his calling and with inspiration bringing him both joy and pain, bright moments and bitter disappointment. […]
In the introduction to the “Autumn” part, the protagonist’s painful, agonising monologue said upon leaving his home and saying good-bye to the sun which is “retreating slowly”, will develop into the second “It hurts!” which will burst out in the final scene, when the wind orchestra assembled by the protagonist will try to make primitive music from the torn pages of a book. Having screamed with pain, he will plunge himself on the book pushed by other characters towards the edge of the proscenium. He will feel pain because his life is being torn like the pages of his book. Because his youth has gone by, the most beautiful years of his life, which will be scattered away by a strong pull, like splinters of wood stuck into a black “tablecloth of death”…
[…]
Audronis Liuga, “The Primer of The Seasons. Eimuntas Nekrošius Interprets Donelaitis”, 7 meno dienos No. 559, 2003

How Donelaitis’ Peasants Made Nekrošius’ Theatre
Several thoughts after the premiere of “The Beginning. Donelaitis. The Seasons”
[…]
Nekrošius’ faithfulness to his own theatrical idiom and his manner of exploring the world is striking. Having come home after “The Seasons”, you can read the above-mentioned book half the night and not discover any contradictions or surprises. Now the theatre as a space between words and action seems to be an unquestionable axiom, as if two years ago it were not considered a kind of heresy. […]
One wooden board tossed across the stage is enough to make ice melt down; wet white linen hung on a clothesline is enough for the stork to return; two benches and a bridge built in several minutes […] are enough to make a flood; a swing and several red bricks are enough to build a new church; a wet jacket is enough to create the endless humidity of a hot summer; a simple fence and a bridal veil hidden under the collar is enough to choose a bride, and several larger or smaller sticks as if taken from Dali’s pictures are enough to support a disappointed or exhausted man. A simple rope can be reincarnated at least several times in the course of the performance in the form of a woman’s breast or a lightning stroke. It is a maximally mobile theatre: each actor and object on the stage can turn into someone or something else, while sounds or colours can change the seasons or people’s moods.
[…]
From the very beginning, the so-called primordial matter in Nekrošius’ performances has been the motive force of the action (both outer and inner). […] In “The Seasons” this matter exists first of all in the form of simple relics of peasants’ daily life. Later everything – nails, sticks, ropes, matches, bricks and stones – is put into one pot, so that all these things would not be given too much prominence, mystified or called alchemical elements.
However, they can be sacralised as well: the Narrator-Creator played by Salvijus Trepulis assembles the Book from paper scraps. And still, the matter (paper) itself is more important in the performance than Donelaitis’ words inscribed on it. The material, visual and aural expression of the words is more important than their literal sense. […]
And the peasants themselves played by Žemyna Ašmontaitė, Povilas Budrys, Diana Gancevskaitė, Kęstutis Jakštas, Rasa Kulytė, Kristina Mauruševičiūtė, Aušra Pukelytė and Vaidas Vilius, live and act like an inseparable part of nature. While adapting to the rhythm of their earth, they can play, love, play tricks, overeat, be sensitive and cruel, freeze, drink, in a word – to do that what conforms to the great cycle. In “The Seasons” the narrative line is not related with any concrete person. Even the restrained narrator played by Trepulis is more reminiscent of a shepherd of the little people, carrying them across the river, washing the floor under their feet with his jacket, and as if himself experiencing all the rigours of the seasons (or the soul), the moments of silence, apathy, inspiration and the torment of creation on their behalf. This time Nekrošius turns the change of seasons in nature into a universalised story of the soul experiencing all the tastes and colours of life through ordinary actions. Perhaps that is why it is one of the brightest performances by Nekrošius, in which the darker moments and nightmares come and go as naturally as a spring rain. History is no longer individual and unrepeatable, but on the contrary – constant, necessarily and majestically repeating itself. And rather monumental, like the circle hanging above the peasants’ heads, overgrown with grass, as if sliced off from the soil, in which God once poked a hole with His finger. Not only to allow the peasants to see Him better, but also to make them tear their heads off the earth and clay more often (wasn’t it what Donelaitis wished?).
Gabija Gruodytė, “How Donelaitis’ Peasants Made Nekrošius’ Theatre. Several thoughts after the premiere of The Beginning. Donelaitis. The Seasons”, Literatūra ir menas No. 2942, 2003 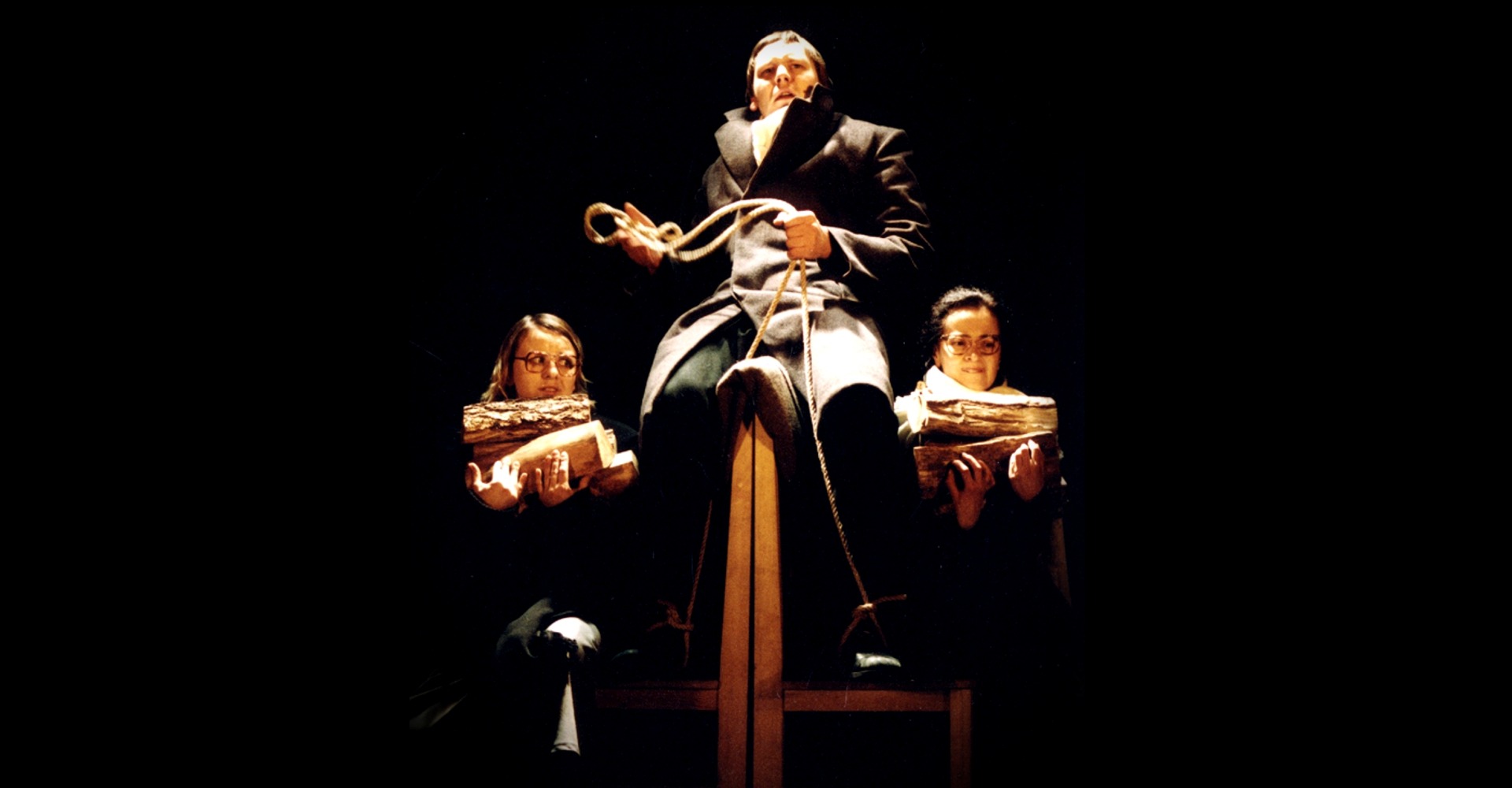 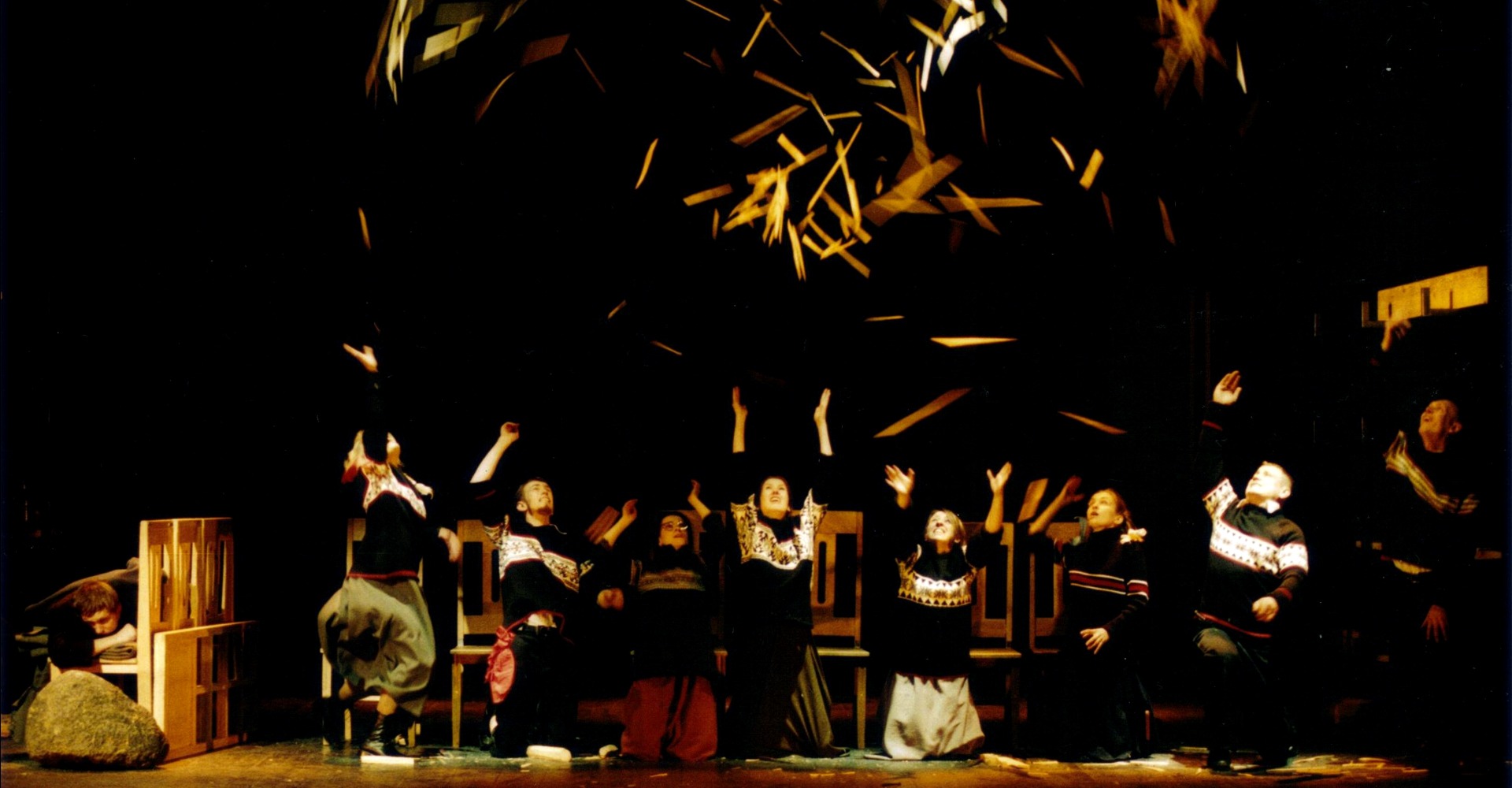 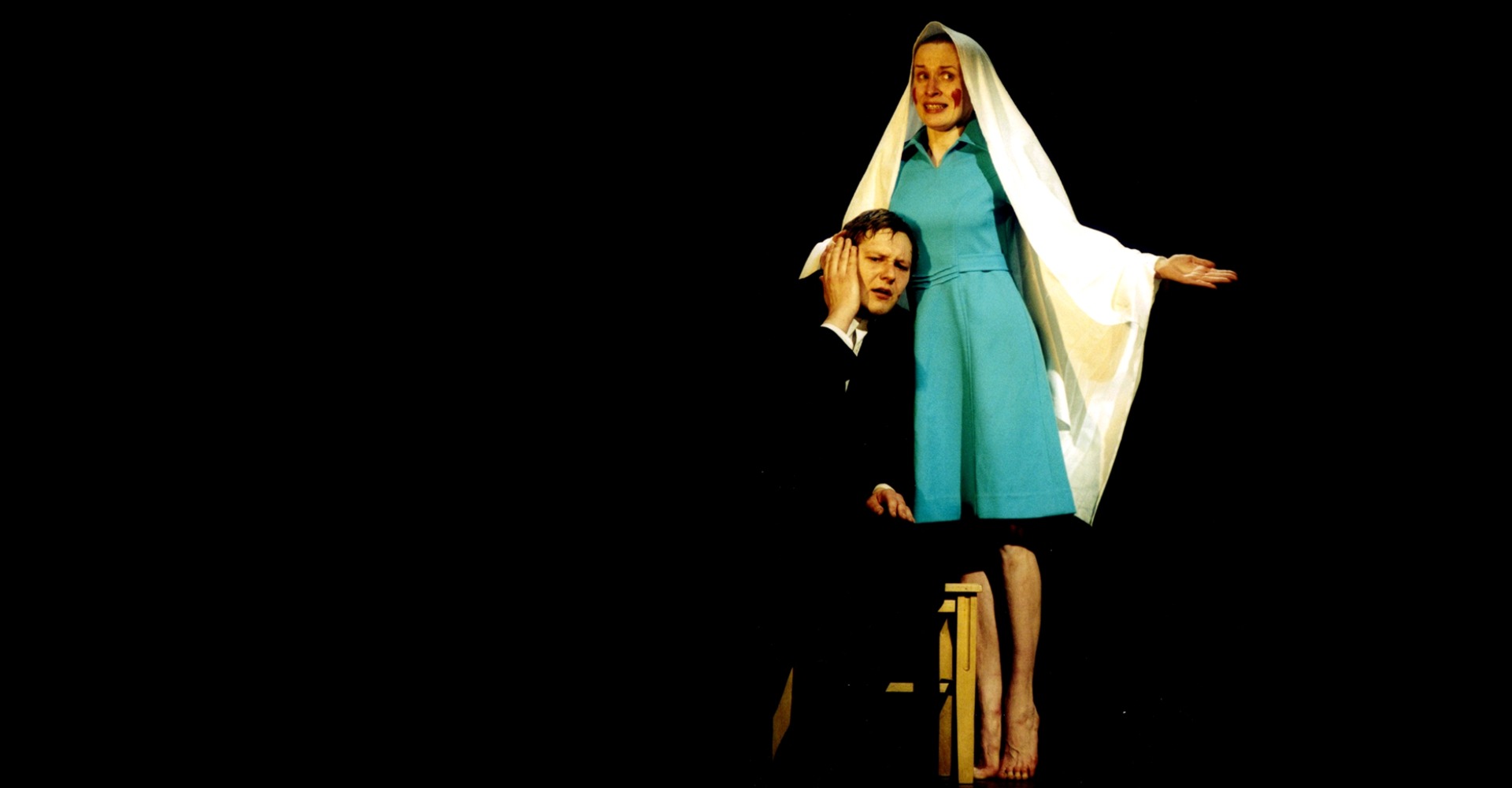 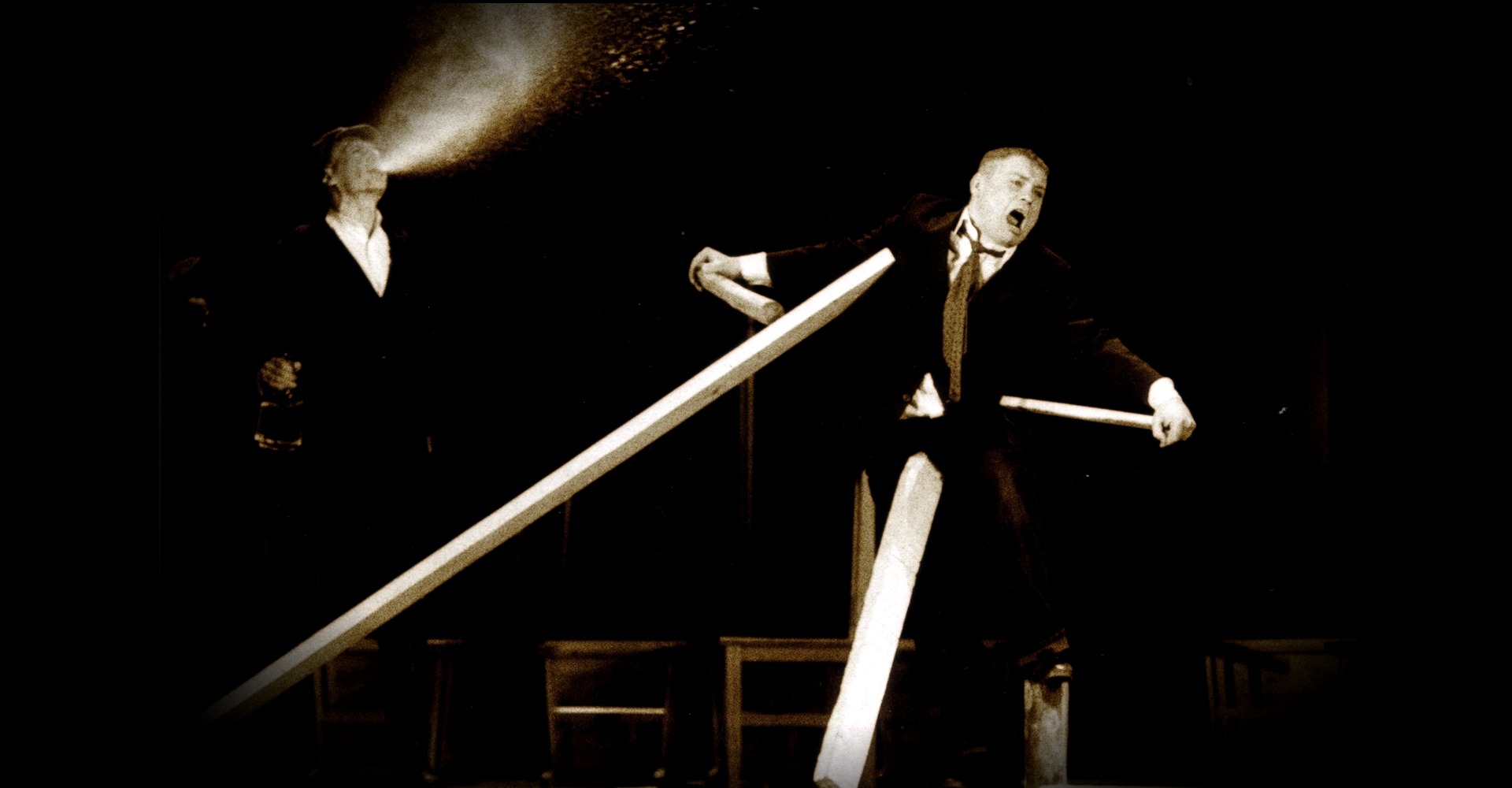 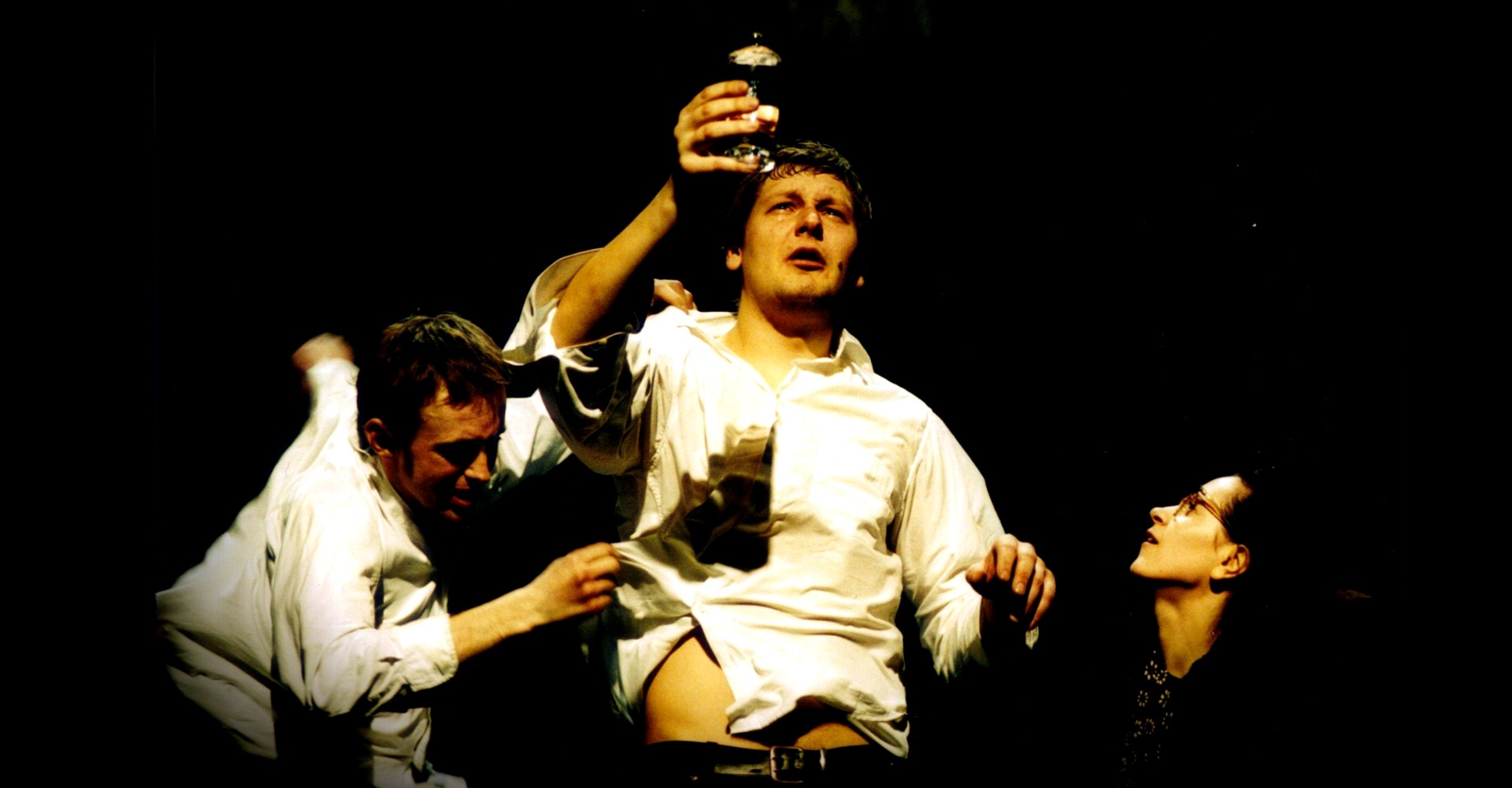 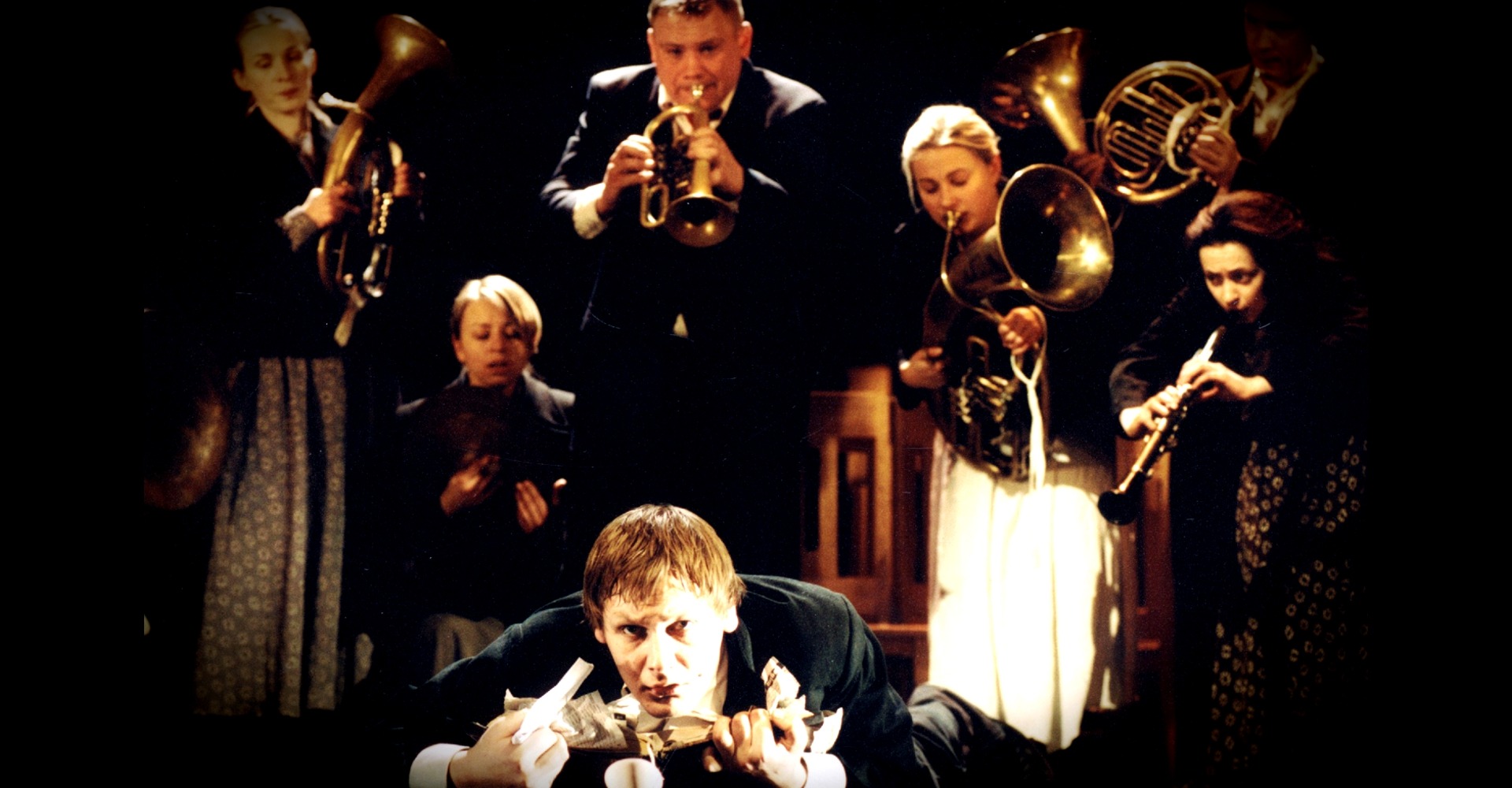 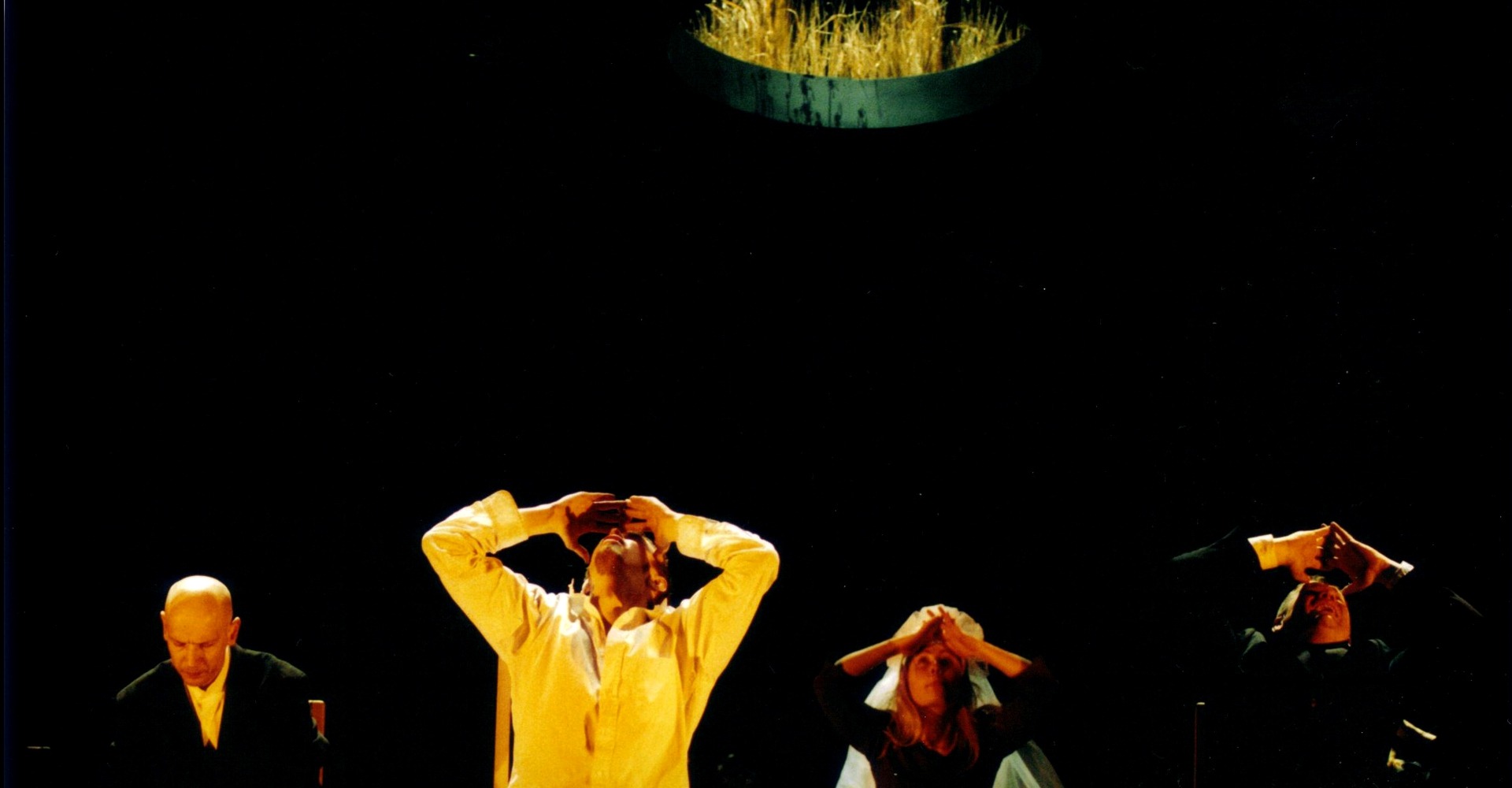