The Songs of the Sirens

[…]
In a simple language Nekrošius […] tells a story that seems to be very ordinary. The dominant tone of “The Song of Songs” is the confirmation […] that simple things are the most important and difficult. That while wading in the darkness of the human soul, we finally find simplicity and confirmation both of form and content. As if with his “Song of Songs” Nekrošius would like to say that also today, like in the course of centuries, you can meet the one whom you will love with all your soul rather than fall in love for three months only. That also today the world must not stray from its course.
The above-mentioned simplicity is by no means the simplicity of imagination. On the contrary. Talking about the elementary things is the most difficult. Nekrošius creates polysemous symbols in a poetic language, which does not easily yield to description. This polysemous character is constructed in sparing means: a single thread is enough to build an openwork house. In the centre of this house the Mistress is waiting for her Beloved. The women holding the corners of the house weave threads into thinnest webs like spiders. It is only when a spider settles in a house that a house is acknowledged to be inhabited. The Mistress knits a web like a trap for her Beloved. Or another symbol – all the characters on stage trying to reach an apple hanging high above. In this way the meanings of a village household and the garden of paradise supplement each other.
[…]
In Nekrošius’ performance the words of “The Song of Songs” have quite an unusual sound. For the most part the action is evolving in complete silence, accompanied only with Mindaugas Urbaitis’ music. When finally the words burst out, their power produces an astounding effect. They really sound like a song. […]
Despite its initial simplicity, Nekrošius’ work is deceptive. Neither He, nor She has a name. Their love involves something more than the destiny of two people. It is like an idea, like magic… The shining radiated by these two characters directs us towards the primeval myths. […] One more aspect of the eternity of “The Song of Songs” is important. The performance convinces us that although “The Song” lasts throughout centuries, it is embodied in every moment of the eternal present.

Songs Praising the Theatre
In the Track of Eimuntas Nekrošius’ Performances
[…]
It would be easy to assert that the director is turning back to the beginnings, to the sources of the theatre – the primary experiences on stage, the first attempts to create a poetic language. They are articulated, with greater or lesser difficulty, by his faithful, experienced and very young actors. One cannot say that there are no famous or well familiar stage professionals among them, but it is not their personas, but their apprenticeship that is more important to the director who is telling mythical rather than local tales and swiftly revealing the farther horizons of an individual unspoiled by civilisation. These horizons are opened not only by means of the allegories of the early theatre – personifications of nature and both human and inhuman figures, ornaments coming from beyond this time and ordinary experience. They extend much farther – beyond the limits of the theatre as a performance. […] And the narrative line here is as if purposefully transformed into live pictures, while emphasising its transience, fragmentariness and repetitiveness. Figures, objects and states are transformed and changed not by the intrigue that unifies them, not by the acting characters, but by the constructing tools. The director gives these tools or instruments into the hands of the actors and the spectators, so that while playing with them we could restore our original skills of talking, singing, love, pain, faith and even communication.
[…]
It is obvious that Nekrošius does not put on stage the text of “The Song of Songs” – the text only connects the images of the original sin, the first love, the building of a temple, the committing of a sin and the search for one’s beloved, flashing at an incredible speed. They are scattered around and woven again into the threads of two betrothed, the nation of Israel, love itself or even the church rites. The variations on the biblical motifs address the experience of suffering and sacrifice rather than love, crowned by earthly rather than divine canonisation, because Sulamite’s little golden hands can hardly reach to knock on heaven’s door. In this “Song of Songs” the feminine vertical of love and the masculine horizontal of reality intersect as two confronting powers. Their whirlwind draws in both Sulamita looking for her Beloved, and all the characters who render body rather than soul to “The Song of Songs”. The body of Nekrošius’ “Song” is a fragile contour of a temple woven from ropes and threads, paper trumpets of prophecies and the falling stars of fading candles – these contrived or natural instruments, with the help of which the first poets praising love laid down their verses. […]
Rasa Vasinauskaitė, “Songs Praising the Theatre. In the Track of Eimuntas Nekrošius’ Performances”, 7 meno dienos No. 638, 2004

A Song Without Words

[…] Eimuntas Nekrošius creates the world anew and inhabits it with people related with yet unestablished genetic links, a “flock” scattering away and reassembling, who communicate by means of conventional gestures, signs and sounds, – residents of a universe established “here and now”. One can find everything here: three witches-girls-mothers (Aušra Pukelytė, Diana Gancevskaitė and Žemyna Ašmontaitė), who are always toiling around, rummaging around among the threads of meanings and as if understanding everything and nothing at the same time; a man-father (Povilas Budrys), a boy following him everywhere like a shadow (Vaidas Vilius) and a holy “fool” with a trumpet (Kęstutis Jakštas), who observes and notices everything. The age, social and other traces of this tribe are not altogether erased, but they keep changing and glittering with momentary reflections on the water. One doesn’t understand if these people work the land, or shepherd a flock of goats, or flutter in the rooms of the court, or expound the scriptures. They do not seem to be sitting on thrones, though – who knows? Obviously they are well familiar with the power that makes the plants and goats grow, but it is difficult to say if they could name it or use the word “love” to describe it. They know that this power is strong and may be dangerous, but are not afraid of it, though prefer not to play with it. They build scarecrows in the field with equal seriousness as they build cathedrals with towers reaching up to the sky, and put the signs of equation between a table and an altar, an anvil and a bed, a throne and a chair. They plant a forest of parchment rolls and take the harvest and bake bread from these rolls. They envelop themselves in the text like in a robe and sing their songs and tales.
In the beginning, a small frame with an apple inside hung above the world inhabited by this community and was of great interest to everyone. Naivety and knowledge, innocence and sin excellently go together, as everything always repeats itself: though the apple is not yet picked and bitten off, here comes a trumpeter calmly eating the “fruit of knowledge”, which was made too symbolic by the humanity and because of that became rotten, and looks at the people who are standing with their heads turned up, unable to pick the apple. Anyway, it is obvious that this world is not the garden of “post” paradise – the story of curiosity, tasting and expulsion repeats itself every day, as soon as one notices in another person the one for whom one must look in the streets and fields, and sail to the sea with paper oars. And the apple is hanging above, though in an ironic frame: supposedly it has long turned into a plot of a banal picture from a village fair. […]
She (Aldona Bendoriūtė) has recognised Him, the one to whom her song of songs will be dedicated. He (Salvijus Trepulis) has also recognised Her, the one who made him roam the fields and streets, not searching, but trying to escape from Her who was searching for him. On the lips of this man, the phrase “How beautiful you are…” sounds almost like a reproach, made uneasy by this unnamed, electrifying, repulsive and attracting question. The woman has to lure him, tame him like a wild stallion. The millennium-old texts of “The Song of Songs” sound like incantations that are able to throw this world of metal, paper, wood and adults-children off balance. […] The rich and colourful poetry seasoned with oriental spices sometimes sounds totally helpless – it would not be able to break through the walls, even though they are woven from cobweb, and it is not on a par with any element of nature, such as passion, which is silent. The word in this performance does not create the worlds and does not become more powerful than other elements of the universe of “The Song of Songs”. Unless for the fact that it participated in the first moment of creation and now reverberates from there with soft, no longer thunderous sounds of “Let it be” having lost their violent power.
Vlada Kalpokaitė, “A Song Without Words”, Literatūra ir menas No. 3025, 2004 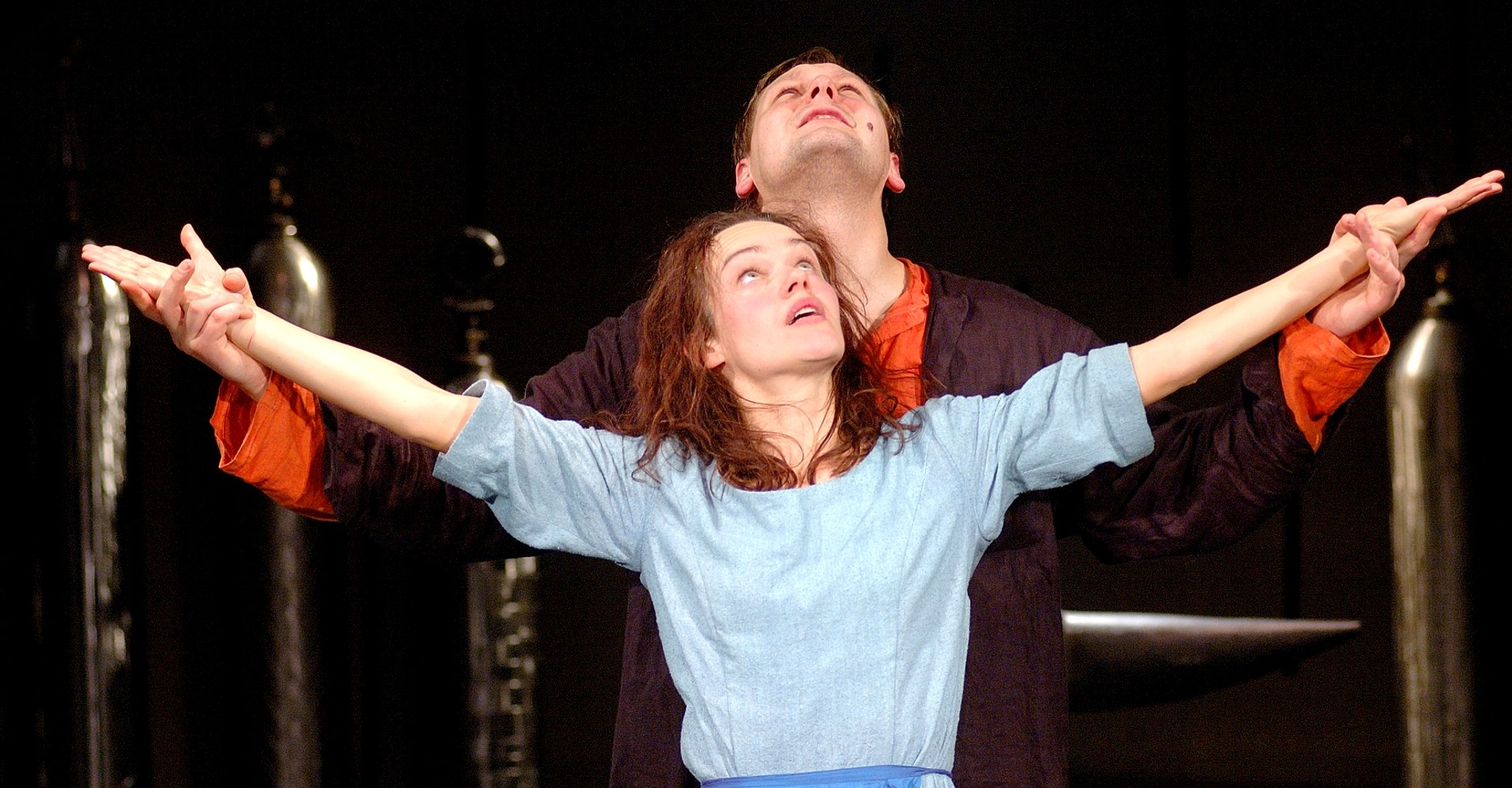 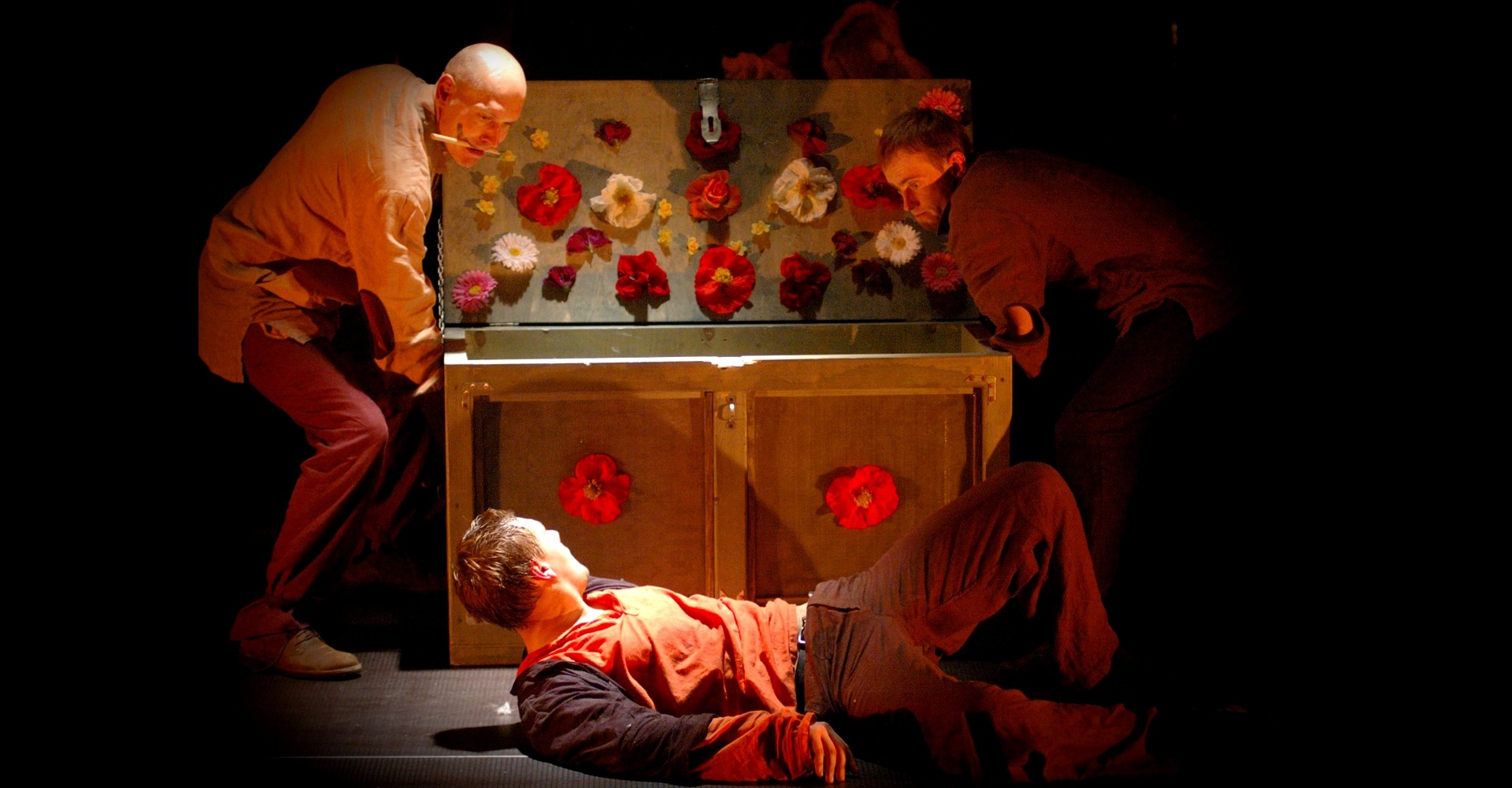 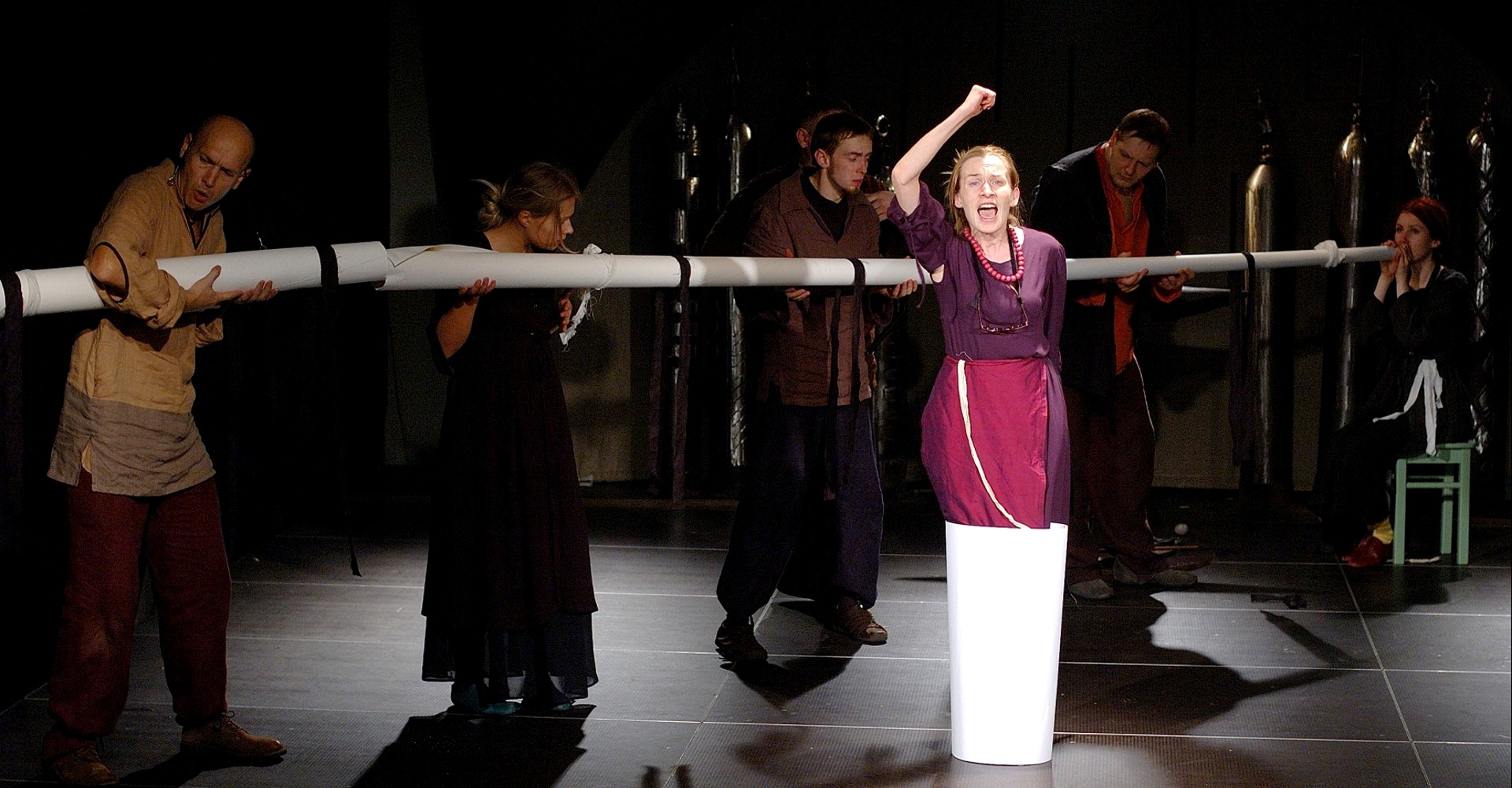 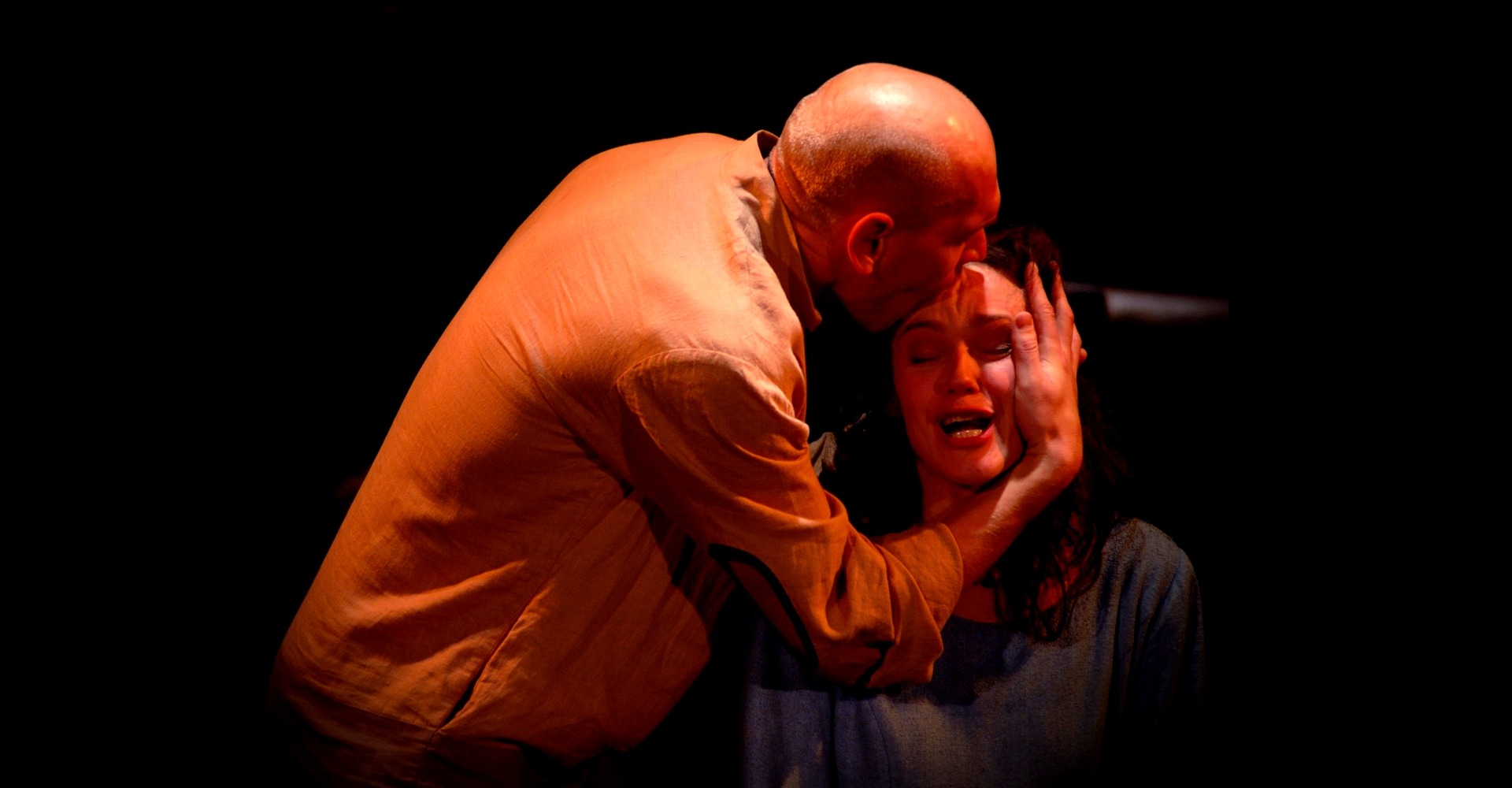 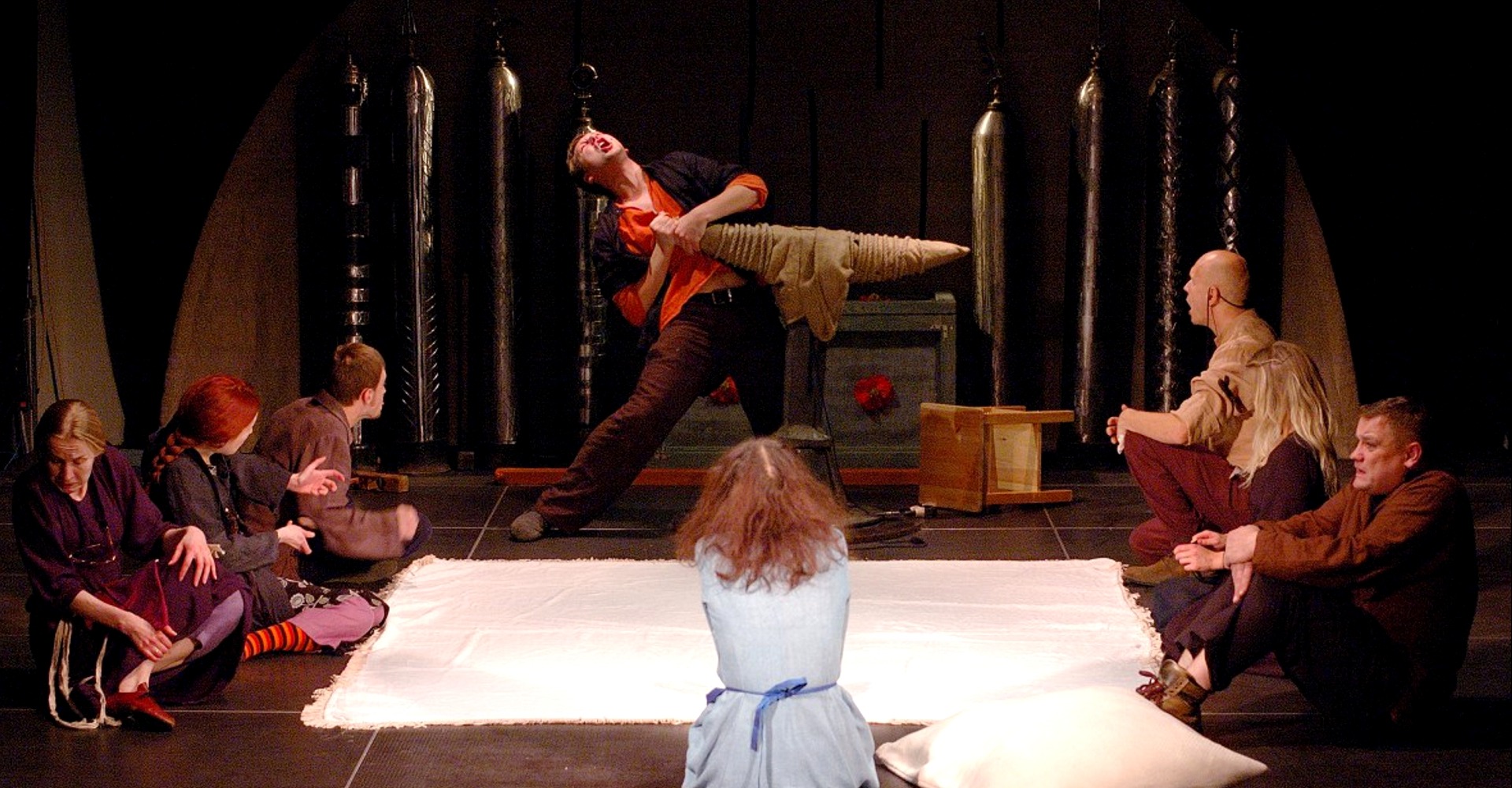 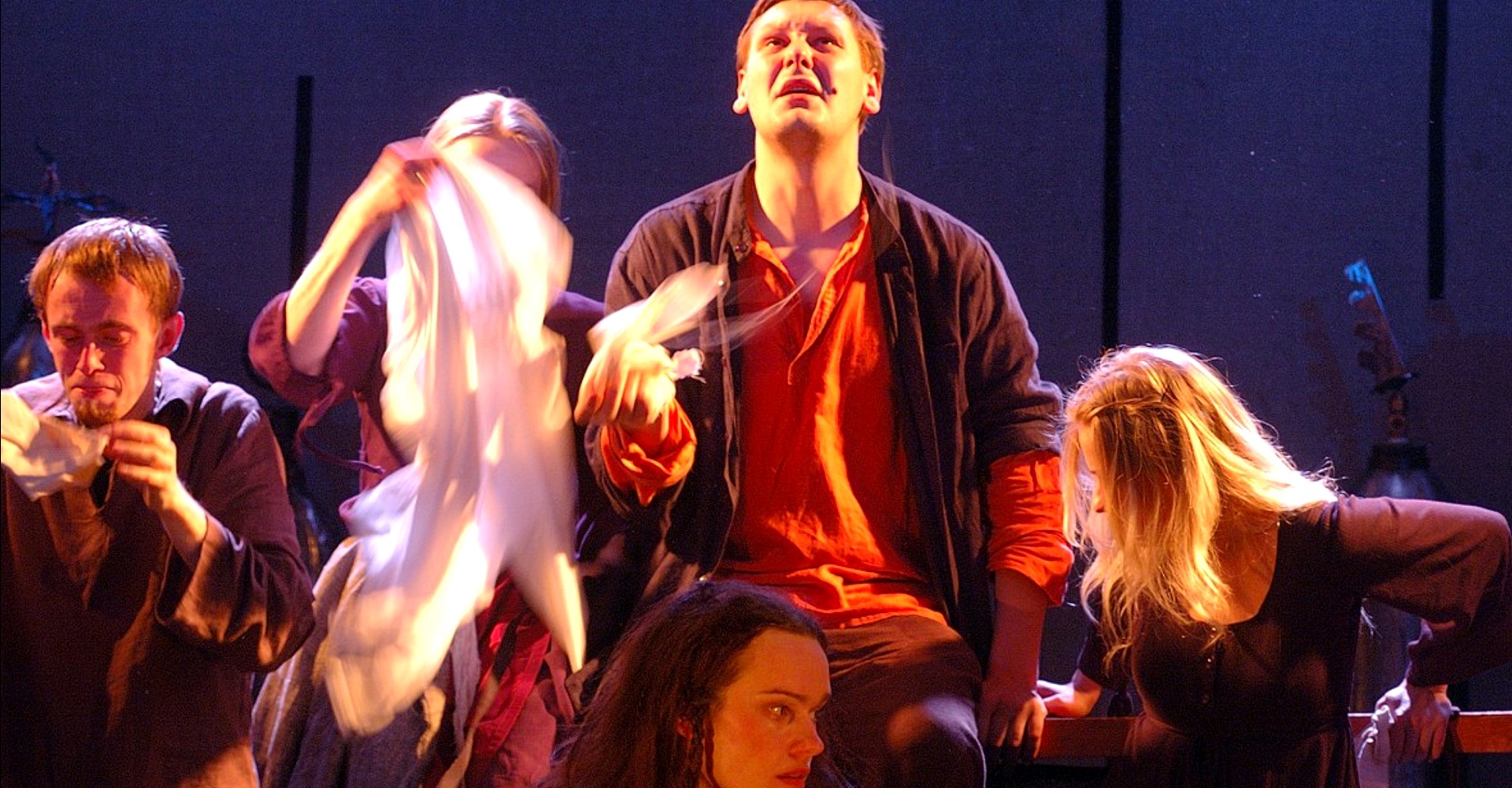 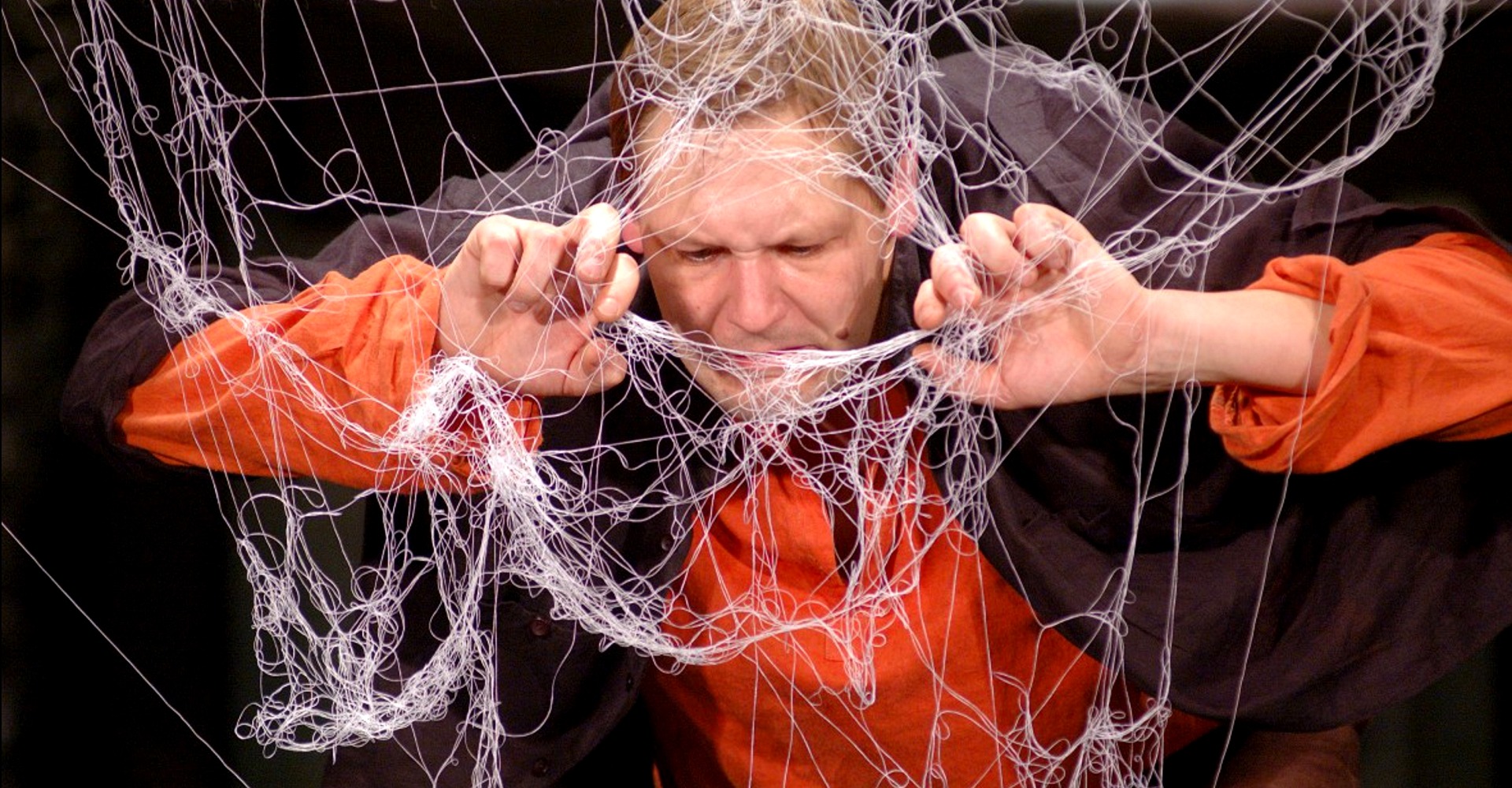 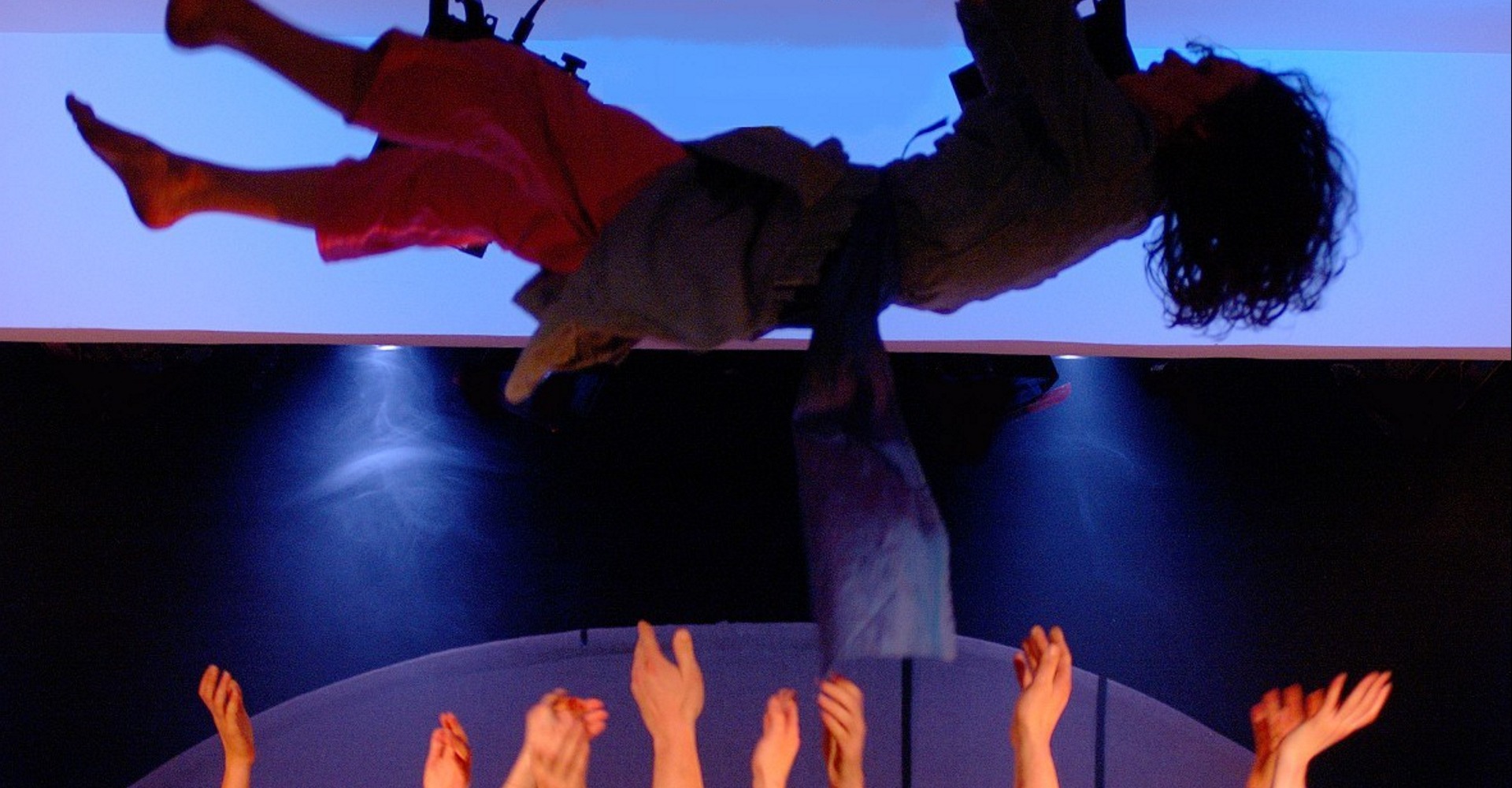 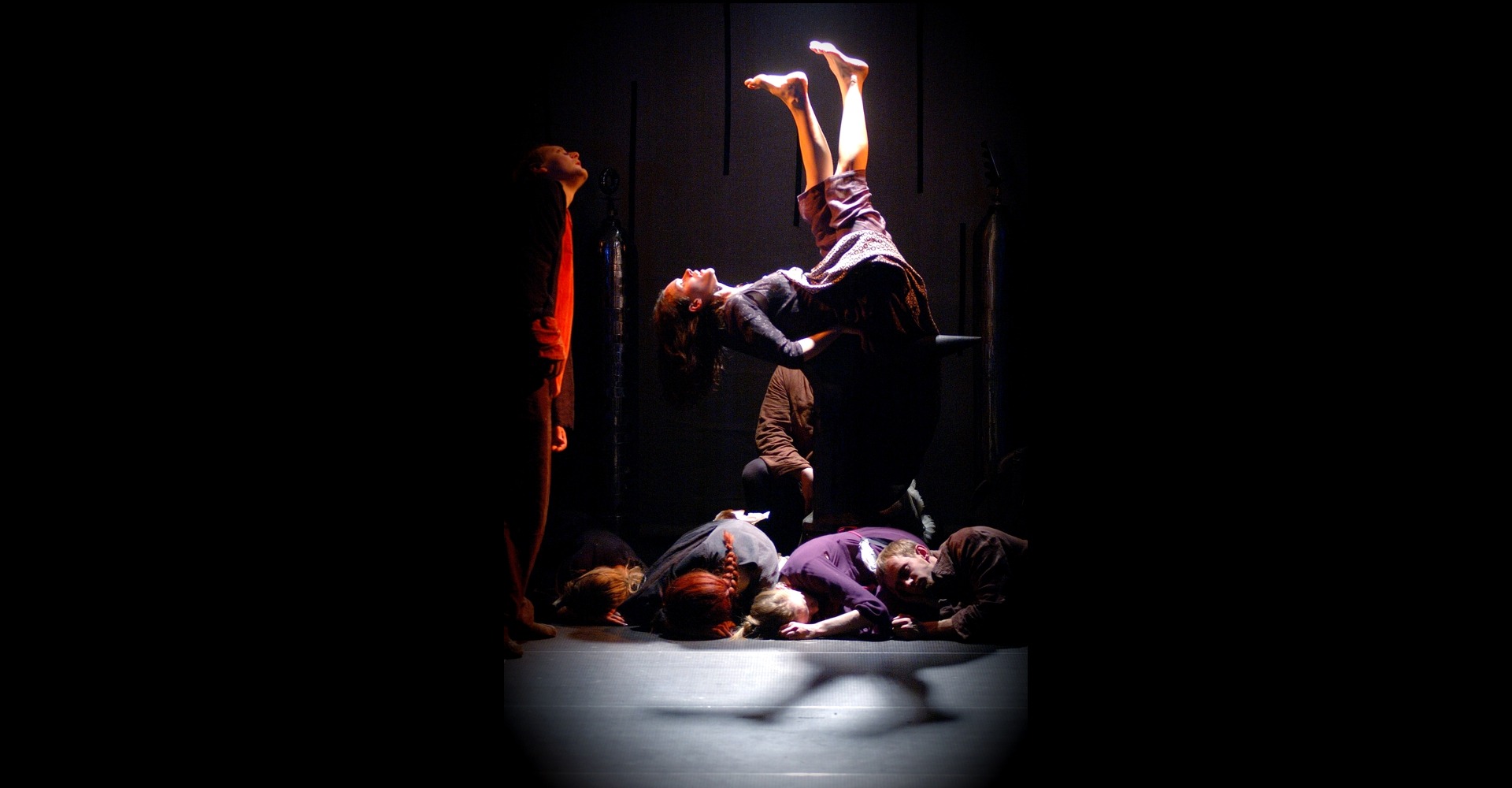 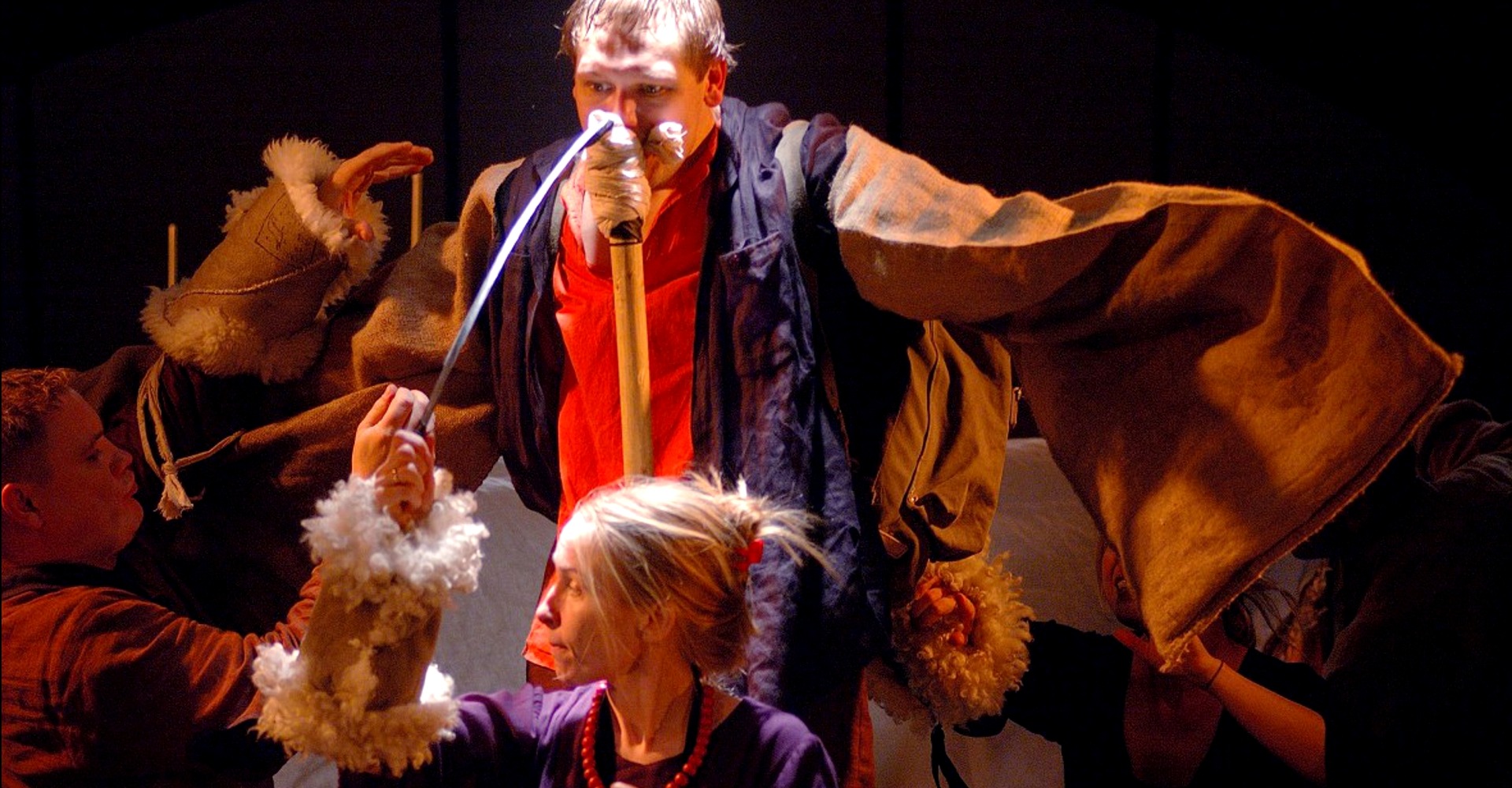 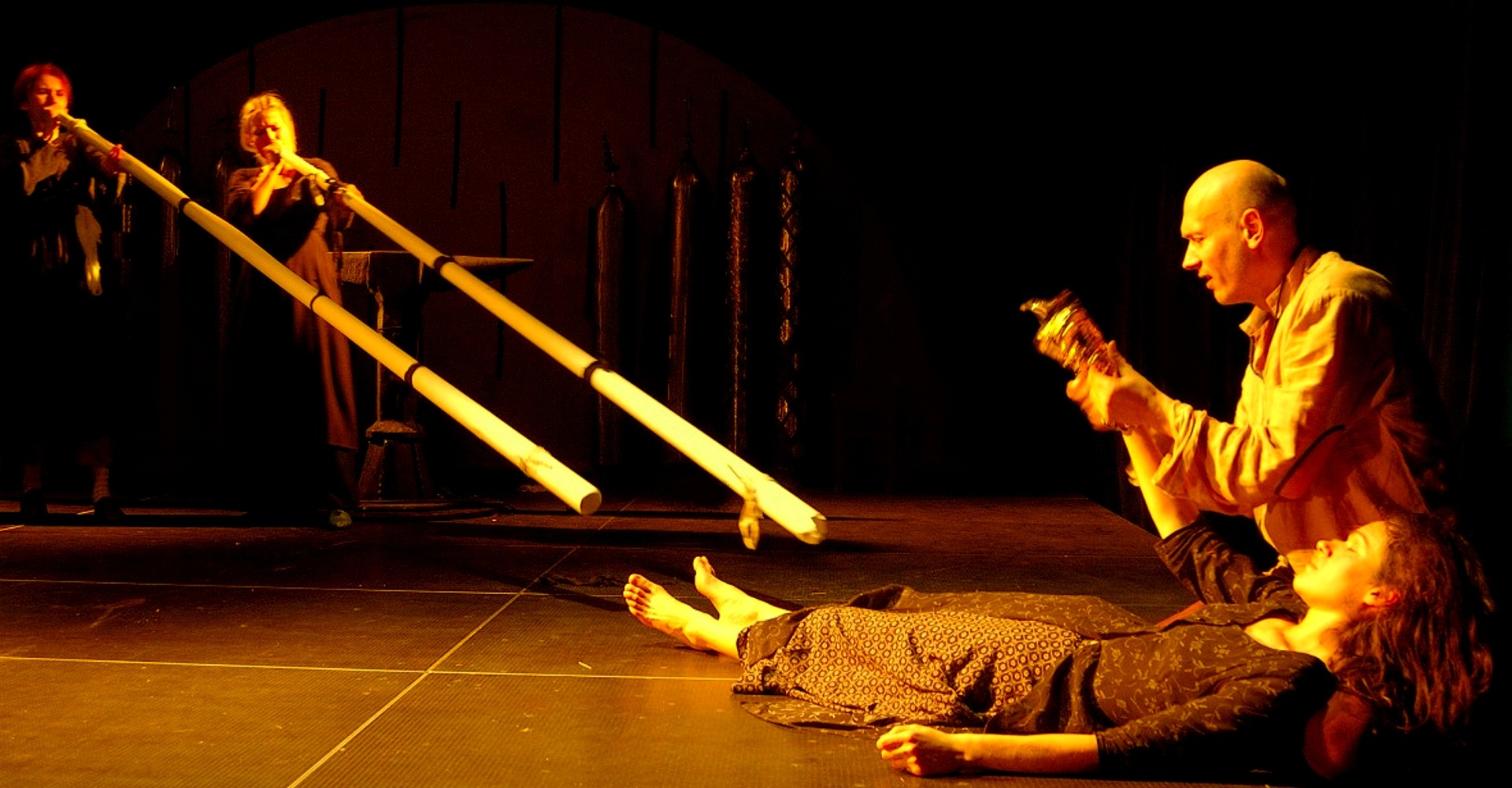 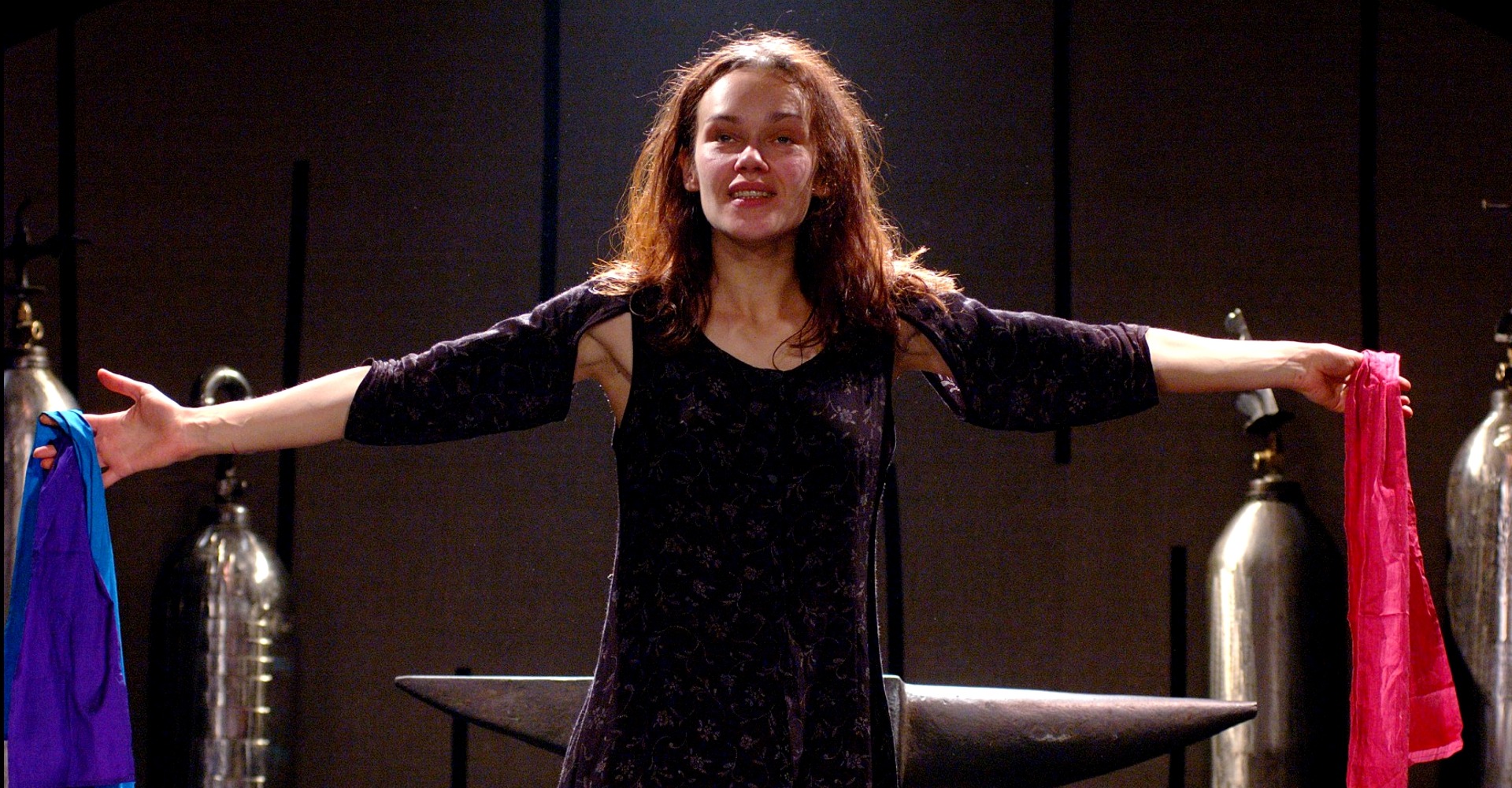 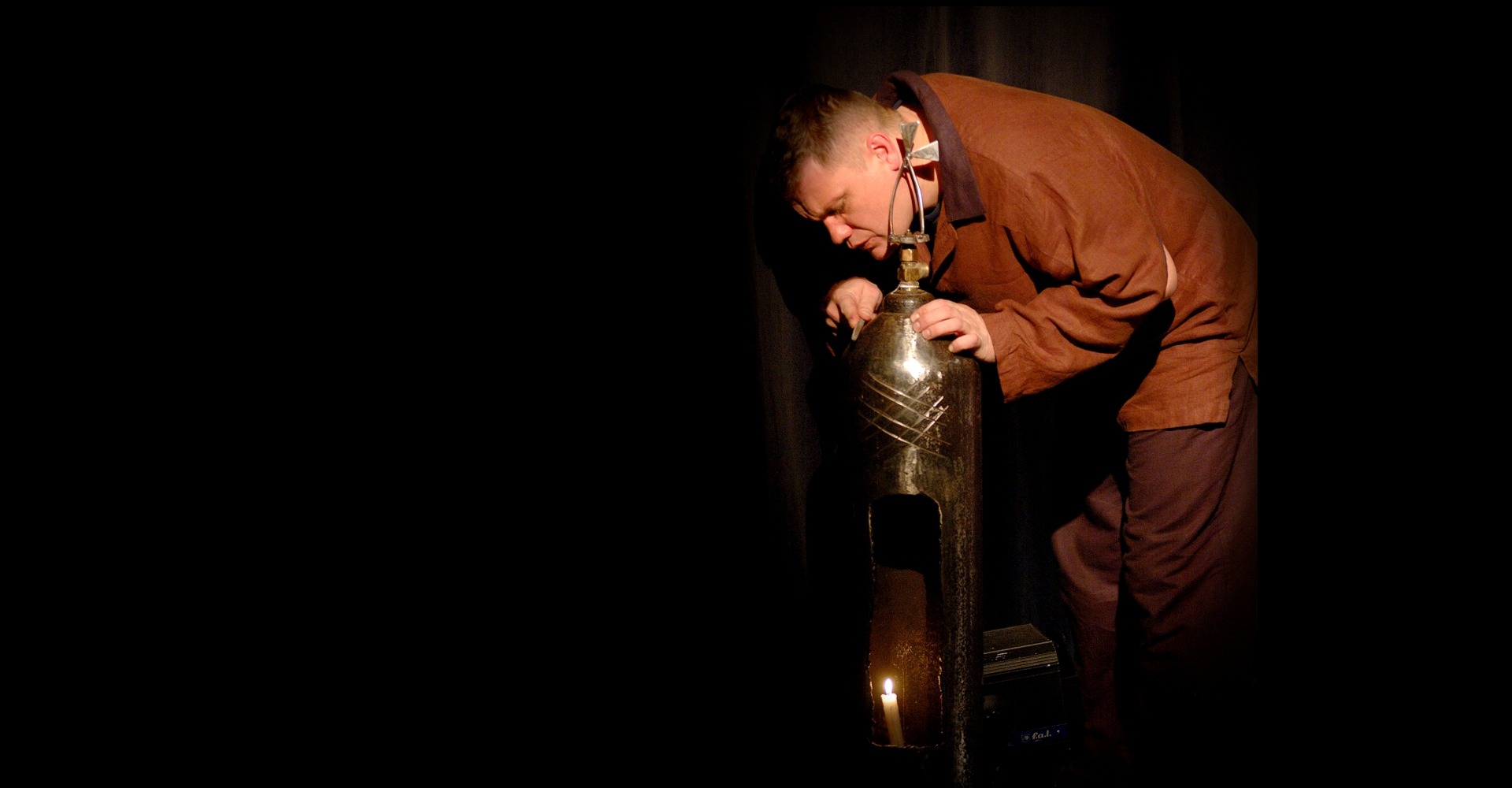